At first, residents of Odessa Texas thought they were seeing ghosts.  Five, sometimes six, White German Shepherds, also known as “ghost dogs” could be seen on the edge of town, elusive and afraid. Sadly, they weren’t spirits at all, but real dogs, dumped by an uncaring owner or breeder on the side of the road.

A Facebook post by a concerned citizen, Courtney Owens, brought the dogs, now called “The Odessa 6” to the attention of Karen Blanchard, founder of Sauver Des Chiens, a Sealy, Texas based rescue that specializes in german shepherd and large breed rescue. 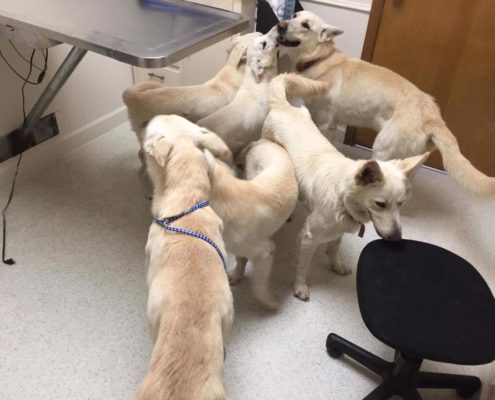 “When we saw her post, we immediately sent her a message to discuss how we could help,” said Blanchard. ”Courtney didn’t hesitate to get involved to get these dogs to safety and find us a rescue friendly vet in the area,” aided by her friends Sharon Odom and Denise Price, also of Odessa, TX.

Just 36 hours after the dogs were rescued from the side of the road, all have been bathed and dipped, been tested for heartworm and tick disease (negative for both, thankfully) and have settled in to enjoy high calorie, high fat food. All will be spayed or neutered once they regain weight. 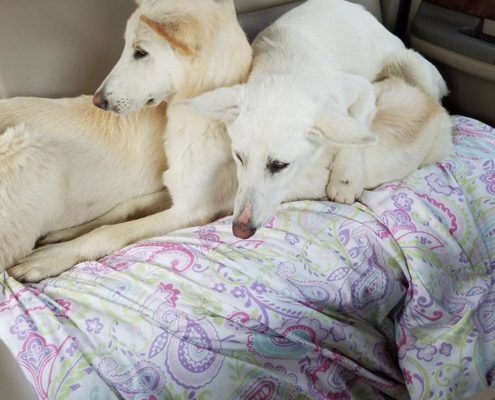 One female pup has an old hip injury and will be transported to Houston for further evaluation.  The adult female, sadly, is pregnant again. Once her pups are born (due soon), she will be spayed, and homes found for her puppies.

“Rescue work is expensive, but the lives it saves are priceless,” said Blanchard. “Our vet bills for The Odessa 6 will be expensive, but it’s worth it. Our name, Sauver Des Chiens means “to save the dogs.”  It’s what we do. “

Those who wish to donate toward the care and vet bills of The Odessa 6 can donate via Paypal (foster@sauverdeschiens.org), via their site SauverDesChiens.org or by mailing donations to PO Box 1091, Sealy, TX  77474

Authorities search for teen accused of throwing puppy out a window