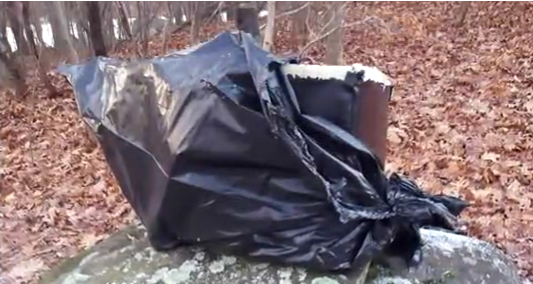 The body of a neglected puppy was recently discovered inside of a discarded black leather ottoman which had been wrapped in a black plastic trash bag and thrown away in a park near a Wolcott, Connecticut, reservoir. According to Tuesday’s WTNH News, a man who was searching for fishing lures made the disturbing find on Friday before reaching out to the authorities.

The puppy, described as a four-month-old pit bull with a red nose, appeared to have been starved and abused. Now, the authorities are hoping that someone will overhear someone talking about the sad situation and report it to the police.  Wolcott Animal Control Officer Roslyn Nenninger stated, “Listen to your children, listen to your peers, listen to your people around you. Somebody knows something and somebody’s going to say something.”

A reward of $300 has been offered (by someone who wishes to remain anonymous) for information leading to the arrest and conviction of whoever is responsible. Anyone with information about this cruelty case is asked to reach out to the Wolcott police at 203-879-7626.