A beloved elephant, who resided at the Oregon Zoo, has been euthanized at the age of 54. The decision to put the elephant, named “Packy,” down was made by zoo veterinarians who could not find an effective treatment for his drug-resistant strain of tuberculosis, reported KATU News. 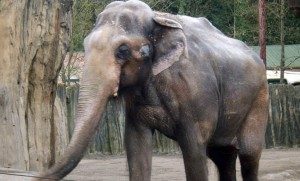 The decision to end Packy’s life was not without controversy. On February 7, the animal welfare organization, In Defense of Animals, issued a press release about Packy and the situation. A portion of the release, which was issued to help spare Packy from death, reads:

Animal advocates from In Defense of Animals and Free the Oregon Zoo Elephants are urgently calling on citizens to plea for the life of beloved elephant Packy, following a leak of the Oregon Zoo’s apparent plans to kill him. An elephant keeper and another Zoo employee, calling themselves “Team Packy”, have exposed what appears to be a closed-door, lethal discussion between the Oregon Zoo management and Metro Council. 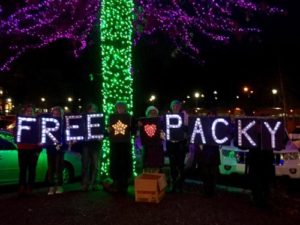 A statement by the keeper on a dedicated Facebook page reads, “It appears Zoo Management and Metro are about to make the decision to put Packy down and this decision is not based on science, safety or Packy’s best interest. It is a risk based decision made by politicians, attorneys and other officials who fear the future repercussions of keeping him alive.”

“Make no mistake, this would not be ‘euthanasia’ but ‘zoothanasia’ (the killing of zoo animals who are considered to be surplus), Euthanasia is killing out of compassion to alleviate an individual’s suffering. This does not appear to be the case for Packy.”

In a statement, the zoo’s lead veterinarian, Dr. Tim Storms, implied that there were no other feasible options for treating the ailing elephant:

We’d run out of options for treating him. The remaining treatments involved side effects that would have been very hard on Packy with no guarantee of success, plus a risk of creating further resistance.

On the Facebook page which was created to help keep Packy alive, a statement was released after the elephant was euthanized:

Hi everyone,
As I am sure most of you have heard, the worst has happened. Packy was put down this morning. We want to thank you all for your help and support in trying to stop this from happening, we can at least live with ourselves knowing that we did everything we could to try to change the minds of the Director and Assistant Director in this matter. Please understand that we will be offline for the most part as we take time to mourn the loss of our beloved family member.
Thank you all again for everything each of you have done,
Sincerely,
Team Packy

(Images via Team Packy and In Defense Of Animals)