You are here: Home1 / News2 / Dogs3 / Behind the scenes video shows dog forced into churning water in movie 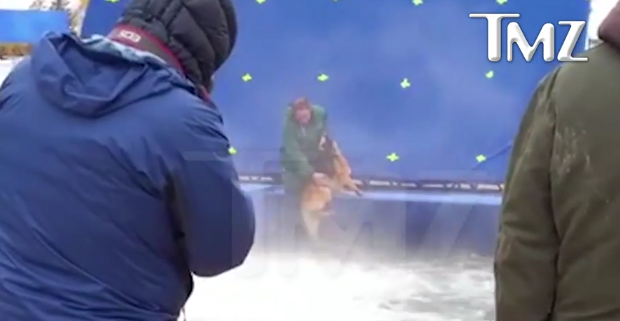 Update: According to TMZ, the American Humane Association representative who was present during the filming of “A Dog’s Purpose” has been suspended following the release of the disturbing video footage showing the terrified dog being forced into the churning water. An independent third party is being brought in to investigate the situation.

On Wednesday, TMZ released disturbing behind the scenes video from the upcoming movie, “A Dog’s Purpose.” The video shows a trainer trying to force a frightened German shepherd into churning water. Voices can be heard stating that the water is warm and coaxing the trainer to just “throw him in,” despite the dog’s obvious fear.

The dog is first partially put into the water – presumably to let him know that it is not cold. While it is disturbing to witness the dog’s terror over being forced to do something that he clearly doesn’t want to do, it is the final moments of the behind-the-scenes video that are heart stopping.

A person in the water is near the edge of the pool where the dog is thrown in – the dog’s head remains above water momentarily and then disappears beneath the tumultuous surface. As soon as the dog goes under, someone repeatedly screams “cut it,” and the fate of the dog, based on the footage, is unknown.

According to TMZ, director Lasse Hallström was present during this portion of the filming.  Amblin Partners and Universal Pictures told TMZ that they would be investigating the circumstances surrounding this particular situation.