A beautiful dog, covered in maggot-infested bite wounds, appears to have been used as a so-called “bait dog.” Bait dogs are typically used in the blood-lust “sport” of dog-fighting to train fighting dogs to be game enough to injure and kill. 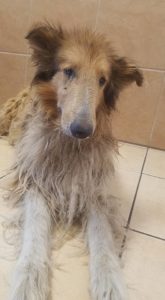 According to Pupz N Palz Rescue, the young Collie, dubbed “Mitchell,” was found near death in Modesto, California, in July. His severely wounded body was infected and infested with hundreds upon hundreds of maggots which were feasting on his battered body.

The rescue group described his pitiful condition upon arrival:

His neck was swollen so badly with deep bruises, abrasions and deep wound from an embedded chain leash that was wrapped around his neck. Holes so deep it took days to fully flush them to rid all the maggots. Dead tissues covered his back end. Not only did the maggots eat the dead skin but also into the fat and muscle as well.

Since the time that Mitchell was found, he has undergone extensive treatment, including multiple surgeries. Amazingly, despite the severity of his wounds, he is expected to recover.

Donations for Mitchell’s veterinary care can be mailed to:

WARNING EXTREMELY GRAPHIC AND FOUL LANGUAGE Update on Mitchel the new FOUND purebred Collie just off the Mitchell onramp in Ceres late last night. I just thank God Nicole got him or he likely would not be here today. With a gash in his neck from embedded collar to severe matting he was taken to Dr B today. He had a high temp maggots coming from holes in his neck and would need to be sedated to be completely shaved down to see just what we were dealing with. Bloodwork was done to ensure sedation was able to happen today. He was under about an hour half completely shaved and wounds flushed. Dr B said this was the worse case he's ever seen of maggot infestation. He also said though that it's the maggots that probably saved his life as they help with infection. He also received bag after bag of IV fluids as he was extremely dehydrated as well. I honestly don't know how this dog was still standing let alone running in and out of traffic getting into the freeway. :(THIS is the result after all this. I'm sorry but I'm beyond PISSED right now. This either happened over time of abuse or perhaps even a bait dog.I'm telling you right now that if this so called owner wants to come forth now….we have documents now through our vet and we will fight tooth and nail for this dog!!Tears came tonight seeing this. Then came the upset tummy and feeling of just wanting to get sick. NEXT came rage!! Extreme rage…why..who could do this??I hope we never cross paths is all I can say!!!Original thread with the gofundme link too. Please share and/or donate if you can https://m.facebook.com/story.php?story_fbid=1409030035816859&id=169128339807041

Tied up dog died in the midst of California heat wave

Mother grieves for son electrocuted as he tried to rescue family cat in flo...
Scroll to top