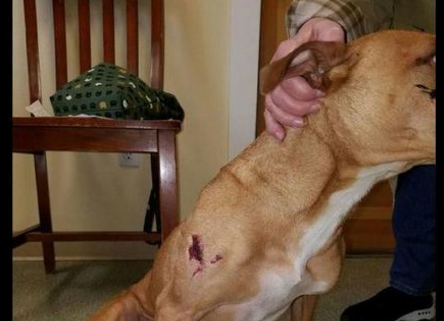 Authorities in Island County, Washington, are searching for the person responsible for throwing a dog from a moving SUV. According to Tuesday’s KIRO 7 News, a witness observed the cruel incident, which ultimately resulted in the dog’s death, on Monday evening.

The Island County Sheriff’s Department released information about the crime:

at “approximately 8 p.m. a witness observed a white colored four-door SUV-style vehicle heading South from Sharps corner on SR 20. As the witness followed the vehicle the driver reduced their speed, the rear passenger door opened and a reddish colored pit-bull was thrown out of the still moving vehicle. The vehicle swerved towards the dog and clipped it causing injury, the injured dog was then hit by another vehicle causing additional injuries.”

The injured dog was taken to an emergency veterinarian for treatment, but her injuries were so severe that she had to be humanely euthanized.

Anyone with information about the owner of the dog or the driver/occupants of the white four-door SUV vehicle is asked to reach out to Carol Barnes, the Island County Animal Control Officer, via the ICOM dispatch center at 360-679-9567 or send an email to Tips@co.island.wa.us

Pit bull who saved boy’s life will not be euthanized – read the story here. 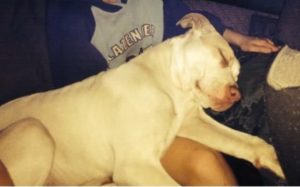 Heartbreaking farewell as soldier drapes American flag over body of his canine...

Dog owner tells shelter ‘dog needed to be disposed of’ like tra...
Scroll to top