You are here: Home1 / News2 / Dogs3 / K9 News4 / Ailing K9 honored in final ceremonial walk before being put down 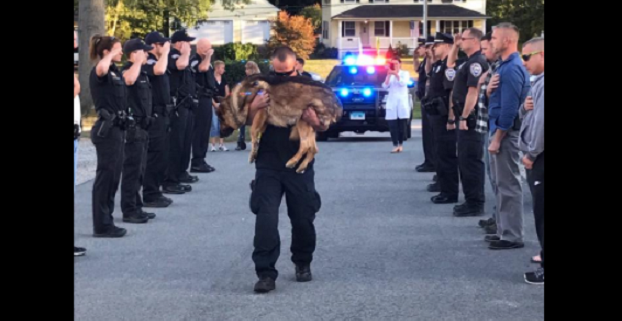 A police K9 in Middletown, Connecticut, was honored in a final ceremonial walk before his handler was forced to put him down because of a terminal cancer diagnosis. On September 1, the Facebook page for the Middletown Police Department posted poignant images of the canine being saluted as his handler walked him to a veterinary hospital to be humanely euthanized.

Officer Michael D’Aresta unfortunately has to make the toughest decision any K9 handler dreads making this evening at Pieper Olson in Middletown at 1830 hours.

K9 Hunter has been ill for that past several days and when tests were conducted they revealed that K9 Hunter has a very aggressive form of Liver cancer. They unfortunately recommended that he be euthanized.
Officer D’Aresta and Hunter have been an exceptional team serving the City of Middletown in a high caliber since 2007.

Adding the words that are were so painfully apparent to anyone viewing the photos:

So as you can imagine, this is extremely difficult for Mike and his family.

‘Mary Puppins’ dogs used as nannies dumped in UK as kids head back...
Scroll to top