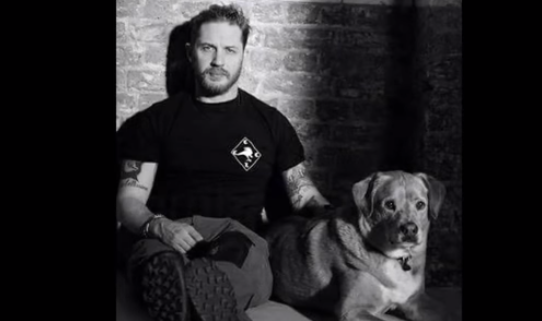 On June 7, actor Tom Hardy penned a poignant tribute to his rescued dog “Woodstock,” who died far too young, at just six years of age. Hardy described how the floppy-eared puppy had been rescued on a dark night in Georgia, while Hardy was in the midst of shooting “Lawless.”

Hardy wrote of the puppy who he had rescued at just 11 weeks of age, “He was an Angel. And he was my best friend. We went through so much together.”

Woodstock, aka “Woody,” accompanied Hardy to “many” sets and befriended countless people. Hardy wrote, “Legend everyone who met him loved him. He didn’t have a bad bone in his body. All he knew was love.”

Hardy wrote that he was “gutted” over the loss of his “bestest” friend. He wrote:

I don’t normally speak out about family and friends but this is an unusual circumstance. Woody affected so many people in his own right so with great respect to his autonomy and as a familiar friendly face to many of you, it is with great great sadness a heavy heart that I inform you that after a very hard and short 6 month battle with an aggressive polymyostisis Woody passed away, two days ago. He was only Age 6. He was Far too young to leave us and We at home are devastated by his loss I am ultimately grateful for his loyal companionship and love and it is of some great comfort that he is no longer suffering.

There is no love quite like that of a beloved dog – the unconditional acceptance and constant companionship is something special and at times (many times) life changing.

Watch the loving tribute to Woodstock below:

Victim in intentional hit-and-run killed after confronting driver for abusing...
Scroll to top