You are here: Home1 / News2 / animal cruelty3 / Abused and abandoned – police search for owner of dog found on hiking...

A dog, with signs of abuse, was apparently abandoned along a hiking trail in Snohomish County, Washington. According to the Snohomish Police Department, the dog was discovered on Tuesday along Centennial Trail, a popular recreational trail built on the old Burlington Northern Railroad line. 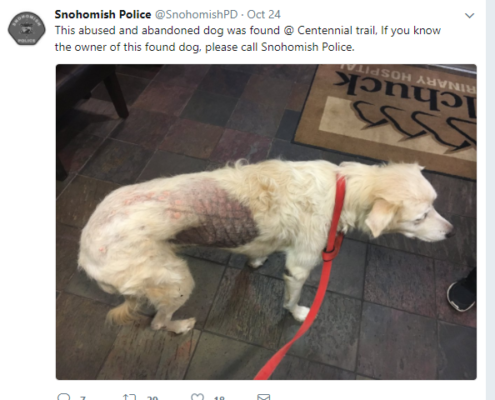 According to KOMO News, the dog was examined by a veterinarian before being taken to the Everett Animal Shelter. The authorities are hoping to find the dog’s owner – anyone with information about the dog, or owner, is asked to reach out to the Snomomish Police at 425-407-3999.

New today: Reward offered after family’s dog beaten to death with a bat

Needed: Kind heart to give senior slated to die just one more chance
Scroll to top