They were the abandoned, cast offs of society…the dogs who had been turned loose and left to fend for themselves. When Hurricane Maria bore down on Puerto Rico, battering trees and flooding everything in its path, the abandoned dogs of “Dead Dog Beach” were swept away.

On September 26, when Christina Beckles, with The Sato Project, made her way from New York to the storm ravaged island, to check on the dogs, she was met with the harsh reality of what had happened. The Facebook page for the non-profit group wrote:

Once the hugs and tears were over the first thing we all wanted to do was go to the beach to look for our feral dogs.
Sadly we did not find them and our hearts are heavy with the reality upon seeing the utter devastation at the beach – they did not survive…..

The New York based agency, which is dedicated to rescuing the abandoned and abused dogs from Puerto Rico, learned that several dogs were actually abandoned DURING the storm. According to the New York Post, a security guard at a hotel near the beach told Beckles that the dogs were  “were screaming in terror.”

The dogs abandoned during the storm have been found and rescued – they will be transported off of the devastated island this Friday.

I got to hug the most incredible team today and hold each of them tight. We are only just able to share due to very limited cellphone and internet access that Ivette rescued a dog the day after the hurricane. She came running up to Ivette…..Now safe in our care – Maria was a throwaway Pittie Mummy with hideously cropped ears and heartworm. Once the hugs and tears were over the first thing we all wanted to do was go to the beach to look for our feral dogs.Sadly we did not find them and our hearts are heavy with the reality upon seeing the utter devastation at the beach – they did not survive…..I am always conscious of the universe sending 'signs'. I think we received several today.Please watch our day and share with everyone you know. The situation is dire down here in PR and the World needs to see it.If you would like to help in our recovery efforts you can donate at https://www.thesatoproject.org/hurricaneThank you!We are #SatoStrong

Posted by The Sato Project on Tuesday, September 26, 2017 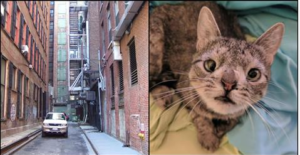