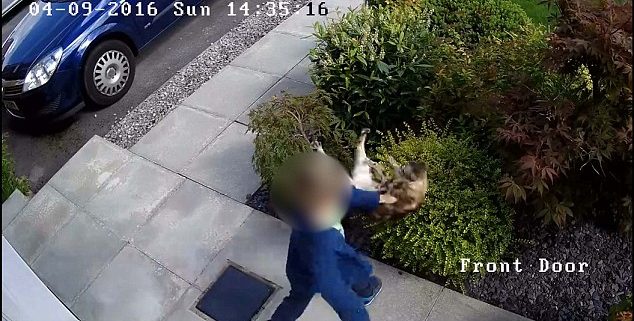 A five-year-old boy from Manchester, United Kingdom will not face any police action because authorities state he is too young to be charged for kicking, abusing and throwing a cat into the bushes, reports  The Daily Mail. 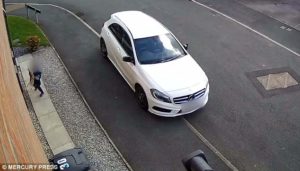 In a disturbing eight-minute closed circuit television surveillance video, homeowner Neil Fisher captured the child wearing a “here comes trouble” shirt,  hitting his six-year-old  house cat named Sky, outside of his home. Sky, however took justice into his own paws, and after he was kicked, swiped at and thrown into the bushes by the child for nearly ten minutes of mistreatment, turned around and jumped on the unruly kid and scratched the brat’s neck.

And today, the grandmother of the naughty child is angry at the Fishers, stating they were trying to “shame” the child who has since had his DVDs taken away and had been sent to his room for a few hours as punishment.

“He was punished for his act. It’s not like he got away with it. What’s done is done. Should we carry on punishing him?,” the child’s grandmother asked as the video makes its way around social media.

Police won’t take any action in the case, stating the child is too young.  The grandmother claims the child is fine with the other animals – including puppies that live in her home. 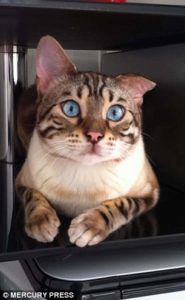 Sadly, the video tells another story of a young child being abusive to a friendly animal. Neil Fisher, who owns his own security firm described what he saw on the video:

“It makes me so angry that anyone, even a child, thinks it’s okay to treat an animal like this. It doesn’t say a great deal for their upbringing. It came to my attention because I could hear the cat wailing and crying and I thought ‘there’s no reason for her to be doing that.”

And he continued stating how upset he was – and rightfully so!

“I’m absolutely furious about it. It was heartbreaking to see an animal you love being treated with absolutely no respect. I’ve had Sky and her twin Oscar for six years since they were kittens, and they’re part of our family. My girlfriend thinks of Sky as her little baby and she was in tears. I went round to the kid’s parents’ house, and his mum just slammed the door in my face before I even got a chance to explain to her what had happened.”

Let’s face it – it’s a parent’s responsibility to teach children to respect animals and treat them kindly. If this kind of behavior can be seen at five-years-old, maybe it’s time to address the problem. Fortunately Sky was not seriously injured.