A Montgomery, Alabama, woman has been sentenced to jail time for the strangulation death of her puppy. According to Tuesday’s WFSA News, Judge Les Hayes found 23-year-old Jessica Pruette guilty in the cruelty case and sentenced her to 125 days behind bars. 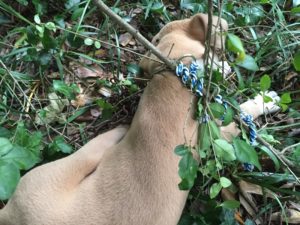 On June 1, Pruette’s puppy, a pit bull mix, was discovered dead in the backyard of a residence on Althea Street. The pup was on a slip lead and tethered to a chain which was wrapped around a stick…the pup, said to be just three months of age, was asphyxiated when he tried to pull free from the chain and was strangled by the slip lead. Adding insult to, in this case, fatal injury, the pup had been tethered outside on a day when the temperature was in the mid-90s.

Pruette tried to claim that the pup had only been tethered, unattended, for approximately one hour, but there were flies around the puppy’s mouth which suggested that the time alone had been much longer than Pruette claimed.

Animal Cruelty Investigator Denton Hawk commended the judge for deciding to send Pruette to jail, rather than only a fine, and expressed hopes that her sentence will serve as a warning to others – he stated, “Tethering has to be done humanely. And if you don’t tether the dog properly and something like this winds up happening, you can go to jail.”

Darla is home: Child who locked her dog in bathroom to keep her safe Wealthy Mumbai residents hire janitor to kill newborn puppies because of their...
Scroll to top