As the 6.2 magnitude earthquake destroyed the Italian town of Amatrice, leveling most of the buildings and crumbling the streets into little more than rubble, human and dog heroes continue to tell some of the most amazing rescue stories. 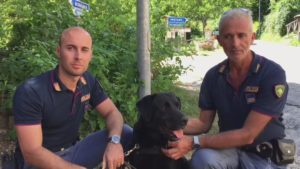 According to  the New Daily, it was the story of one dog Leo who proved himself, along with two policemen, a canine hero, in the amazing rescue of an eight-year-old child in Pescara del Tronto, who had been buried alive for 16 hours. The google (and edited to read clearly) translated story goes like this as told by local Officers Matteo and Liborio:

“… Leo, the four-and-a-half-year-old Labrador from the search and rescue team of Pescara found little Georgia yesterday. Yesterday we were given the information that under a two-story collapsed house in Pescara del Tronto there were two missing girls. Immediately we went to the location and Leo, in less than 40 seconds, gave us a strong signal. With our colleagues from the Reparto Mobile Senigallia and the firemen, we dug with our bare hands for nine hours, and at the end we were able to find the girl.”

Leo wasn’t the only canine hero saving lives. It’s what the dogs live for – to serve and be loyal companions to their human handlers.  Sarotti, a German Shepherd, helped to find a 10-year-old girl also trapped in the rubble in Amatrice. Earlier in the day, he sniffed her (Giulia) out and when rescuers spotted the child’s leg in pajamas, they successfully dug her out.

Although rescuers became skeptical that no one could survive more than three days buried underneath the rubble, the search and rescue missions continued. Many blessings to all of the unselfish rescuers who worked tirelessly to save lives, the hero dogs who bravely pushed on even though they were exhausted, and the survivors who lived to tell their miraculous stories of survival and of the heroes who helped them.

Watch the amazing rescue of a little girl. Your heart will smile.

Florida woman tosses girl’s dog over fence because she wouldn’t... Shiloh woman charged with tying up dog’s snout with shoestring
Scroll to top