Since Wednesday evening, a three-month-old puppy dubbed Caleb continues to fight for his life. A neighbor had witnessed someone throwing the defenseless puppy over a high fence. With the help of animal advocates, volunteers and Fulton County Animal Services in Atlanta, Rescue Dogs Rock NYC were notified and immediately stepped forward to help. 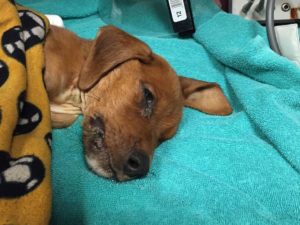 On Friday afternoon, Jackie O’Sullivan, co-founder of Rescue Dogs Rock NYC, announced that veterinarians have now increased Caleb’s odds for survival to 50% – as opposed to Thursday’s estimate of only 30%. While his condition remains critical, he is more alert, however it has been stressed, the little one is “nowhere out of the woods.” 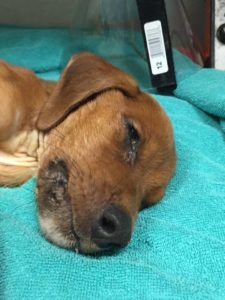 As to his medical issues, veterinarians are primarily concerned about a serious bloodstream infection resulting in sepsis. An update on the organization’s Facebook page by Jackie tells more of the story:

“So far, he’s had a blood transfusion and a plasma transfusion. Today he will have another plasma transfusion. The rectal prolapse (abnormal anus) needs to be repaired, but to do that, he will need to be put under anesthesia and he is just not stable enough right now to do that. Same goes for cat scan of his skull to determine damage there, so those issues requiring him to be put under are on hold for now. Aside from the infection and the prolapse, they know he has blood clots in his back legs and the skin/tissue has turned purple. Concern is this tissue is dying due to lack of blood flow. His blood pressure is holding steady. He has a broken canine which will also need to be addressed at a later time.” 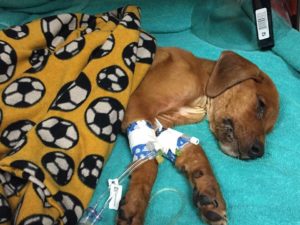 For anyone who is not familiar with Caleb’s torture and abuse previous to his rescue, the trauma the defenseless puppy suffered is almost indescribable. His initial evaluation at the veterinary hospital included the following disturbing diagnosis:

“Upon being examined by the medical team they discovered this puppy was in far worse shape than originally known,” stated Jackie.  “Poor Caleb suffered not only head trauma, but he’s clearly emaciated, covered in what looks to be old cigarette burns, and they found an “abnormal” anus! The medical team was so upset by his condition that a cruelty investigation is being started. There is no question that Caleb suffered cruel and sadistic torture over time. They also discovered he has a broken jaw.” 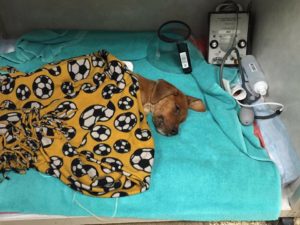 A $5,000 reward has been offered by Rescue Dogs Rock NYC for information leading to the arrest and conviction of the person responsible for Caleb’s abuse. A cruelty investigation is currently underway, however no details have been released.

This is going to be a long road and Rescue Dogs Rock NYC are so happy so many people have rallied to join Team Caleb! His medical/ER hospital bill continues to climb, so please donate and help if you can. Paypal is donate@rescuedogsrocknyc.org or click here.  Mailing address is RDR NYC, PO Box 101, NY, NY 10028.

(Photos courtesy of Rescue Dogs Rock NYC as is the video)

Heartbroken and scared: How a blind, nearly deaf senior pup is left at a sh... Heartbreaking photo released of coyote shot by police and still roaming the...
Scroll to top