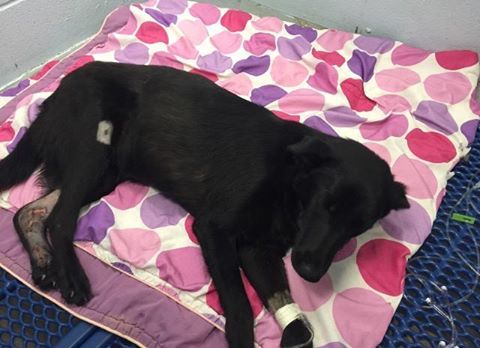 On Friday evening, the Kentucky-based organization, The Arrow Fund, updated Facebook followers about the dog who was found crawling in a yard with two broken legs. Before being rescued, the dog, dubbed “Pixel,” had suffered without care – in tremendous pain and unable to stand.

The Arrow Fund detailed what veterinarians discovered upon examining the grievously wounded dog, “Pixel has a mid shaft femur fracture on his left leg and a femoral head fracture and other small fracture on his right leg. He also has wounds on his hocks . He was immediately put on IV fluids, IV pain medication, and IV antibiotics.”

The organization stated that relieving Pixel’s pain is the number one priority right now – though Pixel needs surgery, his liver enzymes are currently too high, and his potassium level too low. Due to the risk of losing him during surgery, the procedure is being put off until he is stabilized.

Pixel is being provided with round-the-clock veterinary care and pain management support – finally, thanks to veterinary treatment and backing by The Arrow Fund, he is receiving what he needs to survive. Click here to find the Arrow Fund website where donations can be made. Donations can also be mailed to The Arrow Fund P.O. Box 1127 Prospect , Kentucky 40059.

Dog pulled from death row knew love before dying No one has come to his rescue: Broken little dog loses will to live
Scroll to top