You are here: Home1 / News2 / Dogs3 / dog news4 / Unthinkable end for dog inside of stolen vehicle
Spread the love
Tweet 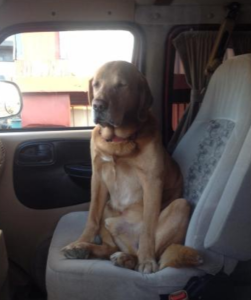 Mark Thompson, of Anchorage, Alaska, feared for the safety of his senior dog, “Flash,” who was inside of a Dodge van which was stolen on July 10 from a job site in Wasilla – his fears were realized when the stolen vehicle was found several days later with the body of his dog still inside, reported Tuesday’s KTUU News.

It is believed that the 12-year-old Labrador retriever mix perished from heat stroke while locked inside of the stolen van which was abandoned near Hideaway Circle. Two people, believed to be responsible for the theft and cruel situation that claimed Flash’s life, have been identified as suspects.

The people implicated in the crime are identified as 36-year-old Gina Jones of Palmer and 35-year-old Jason McDonnell of Wasilla. Jones and McDonnell, who both have prior felony convictions, are facing multiple charges, including auto theft, theft, and cruelty.

The pair apparently took advantage of an opportunity when they came upon it – Thompson, working on a paving project, had left Flash inside of the van, with the windows down. The keys to the van were inside of the vehicle in case another worker needed to move it…unfortunately the it was not another co-worker who got into the van.

McDonnell and Jones were arrested and are being held on cash-old bail.