In White County, Georgia, authorities are asking for the public’s help finding the disturbed culprit responsible for zip tying four newborn kittens to the back leg of a mother cat and then leaving them in a remote area  to die. 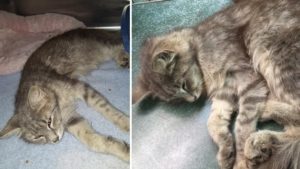 One week ago, the mother cat and her four kittens were discovered in a tangled Kudzu vine. As Animal Control brushed away the vines,  came the shocking discovery of the kittens tied to their mother’s rear right leg. No one knows how long the family had been out there; temperatures exceeded 90 degrees, no food or water.  The mother cat tried desperately to lick the zip ties away so her babies, whose eyes had not even opened, could nurse from their mother.  Tragically by the time they were found, according to the rescue group, Angels Among Us, one kitten had already died, and the remaining three tiny lives  perished within the next 24 hours. 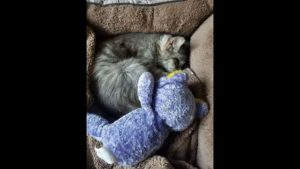 Barely responsive when saved, Aura was rushed to an emergency veterinarian hospital where she received round the clock care. An update on Angels Among Us Facebook echoed the cat’s sadness:

“I met her a little while ago & she’s the definition of heartbreaking. This one got me. I practically crawled into her cage at the vet trying to reassure her that it was OK and we loved her. She’s tiny & sad and pitiful and scared of what people might do to her next. I can’t imagine what kind of evil person could do what they did to her. Thank goodness she made it to us because things can only get better from here.” 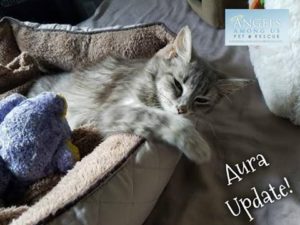 On Monday Aura was spayed and has been transferred to a foster home until she recovers. Sometimes the “deepest wounds are the ones we can’t see.” Aura is described as very sweet and hardly more than a baby herself.

(Photos courtesy of Angels Among Us)