Two underage puppies were surrendered to the New York City Animal Care and Control days apart. The tan colored little guy, PJ  was given to someone for a present, but was surrendered to the shelter just days later because of his owner’s “allergies.” Later in the week, a tiny dark brindle pup, dubbed Brando was found wandering the streets in a Queens neighborhood and brought in as a “stray.” 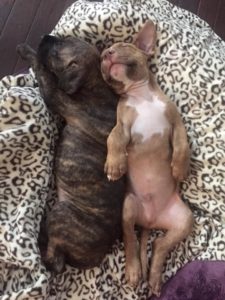 Who knows the real stories of the puppies, and why they were tossed away like yesterday’s old shoes, but their young lives quickly took a turn for the better.  Whether is was pure coincidence or perhaps divine intervention, Rescue Dogs Rock NYC  co-founder Jackie O’Sullivan was contacted by the shelter asking if their organization could help the puppies. 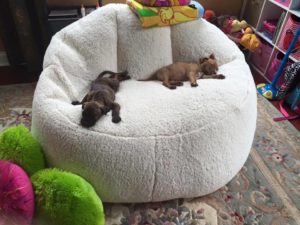 And from there, it wasn’t long before Brando and PJ met for the first time; their bond was instantaneous. In their foster home, PJ and Brando are inseparable. The two eat, play and sleep together – all under the proper tutelage of two female adult dogs in the house who are gently teaching the playful boys proper puppy behavior. Both will be available for adoption in a few weeks. 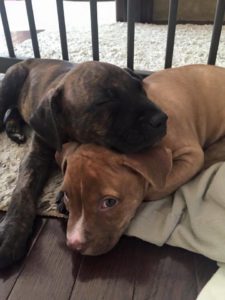 “We cannot take the cuteness here! NYC ACC puppies PJ  and Brando are too cute for words Brothers from another mother; both came in solo…, ” Jackie commented to the rescue’s Facebook followers.

To help Rescue Dogs Rock NYC continue their work, donations can  be made here. 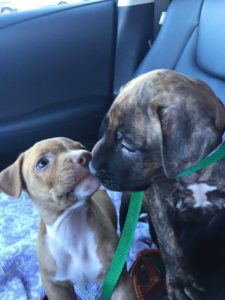