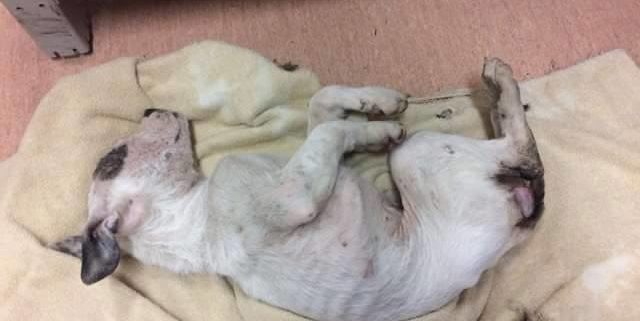 This week, a homeowner in Cross Lake, Manitoba, was shocked to find two dying puppies who had been abandoned on her doorstep. The puppies dire condition inspired the woman to immediately reach out for help from a rescue agency.

Norway House Animal Rescue notified Facebook followers of the heartbreaking situation on Tuesday. The agency stated, “We are beyond belief at the condition of 2 dogs. Found on a persons doorstep who called us right away for help. Worst case of starving ever. And something is terribly wrong with one. Her bowels appear to be coming out.”

A fundraising effort was put into motion to help fly the pups out of the remote area where they were found (approx. 850 km north of Winnipeg). Debra Vandekekrhove and Rose Budd, directors of the rescue agency, told the Pet Rescue Report:

We are removing  and re-homing dogs continually up in cross lake and have medical…kennels….food…local volunteers to  help out…Manitoba mutts  has agreed to take both dogs for us and we fundraised for the flight. Local RCMP picked up the dogs and perimeter air flew them out for us. We had no idea they were as bad as they were.

Though the puppies, dubbed Madeline and Adelyn survived the flight and made it to a veterinarian, both could not be saved. Adelyn’s condition was so bad that she passed away – Madeline continues to fight for her life. 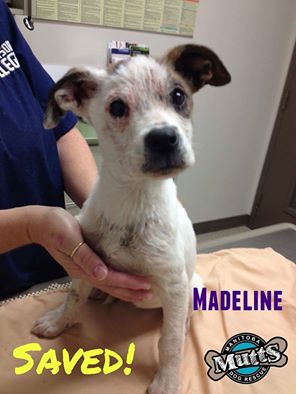 In rescue you always hear, “You can’t save them all”. Sadly today that saying rang true.

Adelyn’s poor parasite ridden body couldn’t hold on any longer, she has been set free of her pain. We are thankful that we were able to show her love and compassion in her last moments and take any further suffering away.

Madeline is still fighting. She is full of worms, demodex mange and has a secondary a skin infection, but now that she can get treatment she has a great chance at a full recovery.