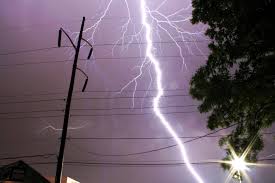 According to Tuesday’s WPDE News, two homeless dogs were found dead in their animal shelter kennel runs following a violent thunder storm on Monday in Darlington County, South Carolina. Though the dogs’ cause of death has not yet been officially confirmed, it is believed that they may have perished after lightning struck the top of the metal kennels which they were being held in.

The tragic and unexpected deaths took place at the  Darlington County Animal Shelter – the facility’s director, Holly Fambrough, has indicated that the electricity to the facility has been shut off, and the shelter closed, until an electrician can determine exactly what happened.

The deceased dogs will undergo a necropsy in order to determine exactly how they died, and if shock from a lightning strike was indeed the cause of death. The results of the examination should be made available in a few days.