You are here: Home1 / News2 / Dogs3 / dog abuse4 / Two dogs dead – believed to have been thrown over cliff
Spread the love
Tweet 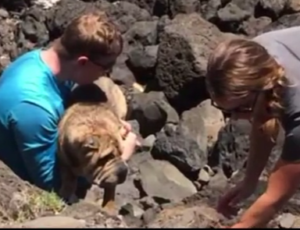 Two dogs in Oʻahu, Hawaii, are dead and the way that their life may have been taken is unbearably cruel. According to Monday’s WISH TV, it is believed that someone threw the dogs over the side of a cliff at Kaena Point. Hikers made the disturbing find on Saturday at the bottom of the cliff.

When the dogs were found, one was already dead and the other was severely injured. Thanks to the efforts of good Samaritans, the surviving dog was carried out of the area and rushed to an emergency veterinarian. Jessica Murray, one of the individuals present at the time told WISH TV about the condition of the surviving dog, “His eyes were just swollen, puff pink balls. He was barely standing up and he wasn’t using one of his legs.” 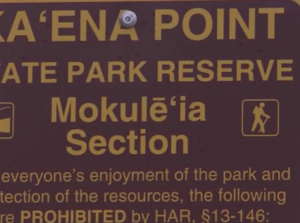 Despite being found and taken to a veterinarian, the dog’s injuries proved to be so severe that he was humanely euthanized. Questions remain about how the dogs came to be at the bottom of the cliff…there is speculation that someone threw them over the side. Murray stated, “Where the dogs were, it kind of seemed like somebody just kicked them off a cliff and left them there.”

The Hawaiian Humane Society has instigated an investigation and has asked that anyone with information reach out to them if they have information about the situation. Tips should be phoned to the shelter’s cruelty investigation department at (808) 356-2250.

On a lighter note, enjoy installment #2 of the “Seager Sagas,” the chronicles of a mischievous pup.