You are here: Home1 / News2 / puppy3 / Truth revealed in case of injured pup ‘thrown from car’ 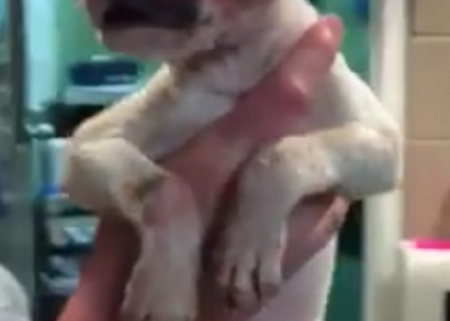 The truth has come out regarding an injured pup who was allegedly thrown from a moving car. As the story was told, the white pup was hurled from a white Nissan Altima in Florence, Alabama – a “good Samaritan” discovered the horribly injured puppy inside of a bag.

The Florence Police Department quickly went to work to find the alleged puppy thrower, but their investigation has led to a new story that does not involve cars or bags being thrown onto the roadway. According to Thursday’s AL.com, the authorities have determined that the person who initially reached out to the authorities about the When questioned, the individual revealed the truth – the white pup had actually been attacked by the man’s adult pit bull. The elaborate puppy thrown from car tale was concocted because the man feared that he adult dogs would be taken away from him if the truth were known.

City spokesman Phil Stevenson explained, “He was afraid that the adult dog had attacked the pup and that he was afraid he would lose the adult dog and he didn’t have money for a vet, so he panicked and he filed a false police report, which is pretty serious business.”

Thus far, the man who filed the false report has not been charged.

Nassau County college student sentenced to 2 weeks in jail for beating dog to...
Scroll to top