Someone brutally tortured a sweet Egyptian Baladi,  (native Egyptian breed) dubbed Anubis in Cairo not long ago. Imagine this boy’s luck – from hiding under a car scrounging for food, most likely not far from losing his life, to Sunday’s arrival at his new loving  and pampered home in Texas. 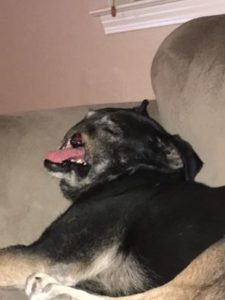 According to the New York Daily News, Kelly Hutson, 48, from Spring, Texas read about the dog’s sad plight online and instantly made the special connection, knowing at that moment she wanted to adopt him. She continued to follow his story after he was rescued. No one knows what happened to his snout except  that it had been hacked off with a sharp object.

Miraculously rescued by the Animal Protection Foundation in Egypt, in January, Anubis was given his special second chance. Funds were raised by the Special Needs Animal Rescue and Rehabilitation (SNARR) group and coordinated volunteers made themselves available at every step of the dog’s trip until he reached his destination. And on Sunday, Anubis arrived at his new home. 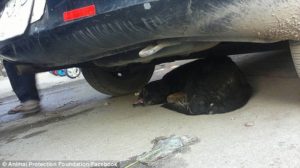 Believed to be anywhere from five to nine-years-old, his new human companion, Kelly, who runs a dog sitting business, describes her new family member as loving to cuddle and loving treats.

But he doesn’t really have any major health problems we’re aware of,” Hutson told the Daily News. “He breathes fine, he eats fine, it’s amazing. This is the sweetest, most loving creature you’ll ever meet.” 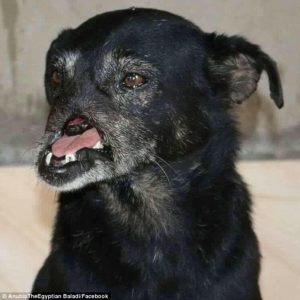 And even though Anubis’ front teeth are worn down from pressing them against the city streets scavenging for food in Cairo, he’s the greatest dog in the world.