A 17-pound-Tibetan terrier has had a life full of neglect, misery and loneliness. Since 2012, Peanut’s history dates back to the Manhattan’s  Animal Care Centers of New York City where he was picked up as a stray, and repeatedly reclaimed by his “family.” 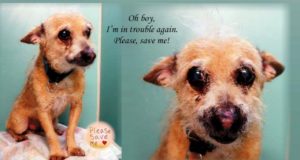 Sometimes getting lost is a forgivable situation – dogs can be dogs and sneak away in the most clever and unexpected ways.

What is a shelter to think, however when Peanut became an all too familiar “stray” after six more times? It then becomes time to change the dog’s future. 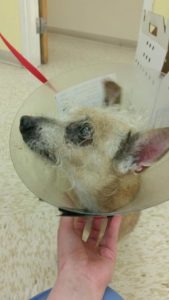 And on July 25, for the seventh time, the extremely frightened, nearly 13-year-old dog was picked up by Animal Control as a “stray”. To make matters even worse, Peanut’s medical needs as well as his aggressive behavior (who wouldn’t be?)  precluded almost anyone from adopting him. The staff at the shelter described Peanut as having the following issues:

Why Peanut was returned to his owner so many times is unknown, but the last five years of his life had certainly been one of neglect and turmoil. And then it happened! Jackie O’Sullivan, co-founder of Rescue Dogs Rock NYC was alerted to Peanut’s one in a million chance to make his freedom walk out of the shelter. 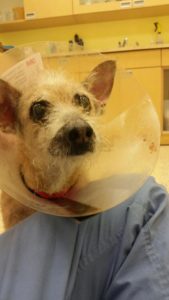 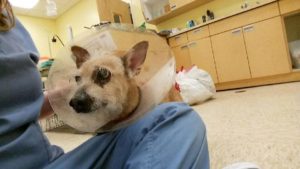 “Many people advocated for Peanut and his plight, and we decided to rescue him to safety so he would never have the chance to return to his owner ever again. He went immediately from the shelter to our vet partner where he underwent surgery to have 10 teeth removed, neutered and medication for his dry eye infected skin and feet,” explained Jackie.

And on Thursday afternoon, Peanut, the 13-year-old dog who almost lost hope of ever being loved, is leaving with his foster dad.

“We can’t wait to post photos of Peanut in his new home …Our mission continues…,” is posted on the organization’s Facebook page.

To help Rescue Dogs Rock NYC save more precious lives just like Peanut, donations can be made by clicking here.