A Pomeranian was rescued from a hot car with temperatures recorded at 121 degrees on Thursday, after the dog’s owner left her in a vehicle while inside a medical facility, reports the Johnson City Press. 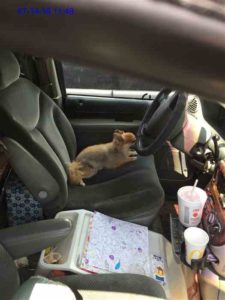 Washington County/Johnson City Animal Control Officer Wayne Thomas had been called by authorities to check on the small dog after calls from concerned citizens. When the officer arrived at the scene, one window of the car was down about four inches. A thermometer placed inside the vehicle initially read 101 degrees, and as the officer took photos and documented the situation, the temperature rose to 121.

The dog’s owner, Blair S. Bays, 54, of W. Watauga Avenue, told the officer he had checked on his dog named Breezy, however Thomas had already been at the scene for a half-hour before Bays arrived.  Onlookers stated they had been standing by the car for ten to twenty minutes before Animal Control arrived and never saw Bays check on Breezy.

Thomas broke into the car and rescued Breezy who he described as lying on the seat panting with a dry tongue sticking out. A bystander offered a wet bandana to help cool the dog down, and Thomas put the overheated pooch into his air-conditioned vehicle.

“He was upset at what he’d done when I explained it,” Thomas said. “You’re basically microwaving your dog.”

Bays faces animal cruelty charges and is scheduled to appear in court on August 16. Bays was allowed to take Breezy home with him.

Leave your pets home in the summer.