A Richardson, Texas couple are mourning the loss of their dog who was allegedly poisoned to death after having ingested a deadly neurotoxin, reports CbsNews. 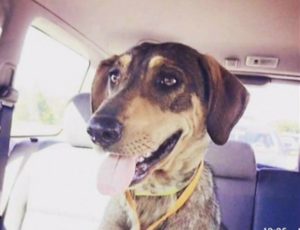 The death of Matt and Beth Steadman’s two-year-old shepherd mix, named Abby, has been part of a series of attacks in their community to the couple because of a political sign in their front yard supporting presidential candidate Hillary Clinton.

“Hillary Clinton, I’m with her,” Steadman stated, but three signs endorsing the candidate have already been stolen.

One week ago, a note was left for the Steadmans stating “Hillary for Prison 2016.” And then the following day, the family’s vehicle was vandalized when someone poured bleach into the gas tank. Then came the worst of all the harassment when Abby started shaking on Sunday. The couple rushed her to the vet, but on Tuesday their devoted little canine pal died; their veterinarian stating the dog had been poisoned. 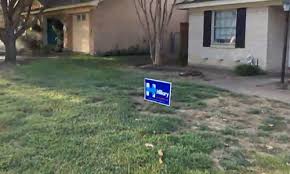 No one knows for sure if their support for Clinton caused the vandalism of their new car or Abby’s death. No investigation is underway by police even though a report is on file. The couple will continue to support the candidate of their choice – isn’t that what America is all about? They hope someone comes forward and tells them who killed their dog and why. It’s not like Abby could even vote.