A Clarksville, Tennessee man faces aggravated animal cruelty charges after a Montgomery County deputy witnessed him grab a brown and white dog by the scruff of the neck and slam it to the wooden deck of his home, reports the Leaf Chronicle. 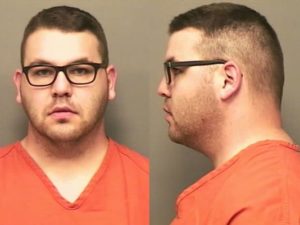 According to an arrest warrant issued by the Montgomery County Sheriff’s Office, on Sunday evening, Sgt. Melissa Collins had been on her front porch when she saw her neighbor Dennis Roger Warnke, Jr., 27, grab the dog and “slam it onto the wooden deck at the rear of the defendant’s house.” The dog then ran back into the house, and moments later Warnke came out again, picked the dog up above his head by the nape of its neck and slam the defenseless pooch to the deck again.

“The dog was thrown down so hard it bounced off the deck. The dog also yelped and went off the porch and laid down,” stated the warrant.

Authorities arrived at Warnke’s home and found the dog shaking in fright and still lying in the same spot. Deputies stated the dog was afraid of their outstretched hand and was reluctant to walk. The dog is now in the custody of Animal Control and being evaluated for injuries.

Warnke told Deputy Charles Hunt “he had gently tossed the dog off the porch.”  Warnke was booked into county jail in lieu of a $5,000 bond. There have been no updates on the condition of the dog.