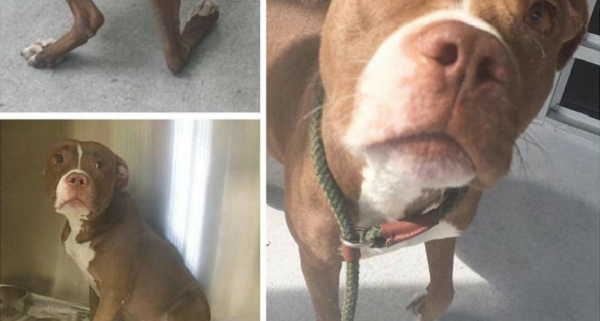 A homeless dog, described as a “sweet” pit bull mix, appears to have a badly broken leg. The dog, dubbed “Mo,” is believed to be approximately four years of age and he has been held at the Miami-Dade Animal Services facility in Florida, since August 29.

Photos of Mo reveal a rear leg that appears to be broken – on October 17, a Facebook networker posted photos of Mo, along with a few words about his plight at the open-intake facility:

Staff pleaded with me to network. 4 yo pittie mix sits in a 3 x 5 kennel 6 weeks now with possible broken leg.

A video clip of Mo (below) shows a dog who appears to be desperate for attention – he gently gives kisses to the person who has stopped by his kennel to say hello.