An entire pack of endangered wolves are going to be killed in the state of Washington. According to Tuesday’s Statesman Journal, the Profanity Peak wolf pack, which consists of 11 wolves, is believed to be responsible for several cow deaths, and the entire pack will be culled in order to prevent more cow deaths. The Profanity Peak wolf pack has several wolf cubs, which are also slated for death.

The decision to kill off these endangered wolves has outraged conservation groups.  Tim Coleman, executive director for Kettle Range Conservation Group, is quoted in the Register Guard:

“Cows grazing in thick forest and downed trees in the Colville National Forest are in an indefensible situation. We believe the wildest areas of our national forests should be a place where wolves can roam free.”

On the Washington Department of Fish & Wildlife website, information is posted about “management” plans when and if predation (the preying of one animal on others) occurs:

The wolves in this pack are fitted with radio collars (which were funded by taxpayer dollars) which will be utilized to track and kill the animals. This is not the first time that wolves have been targeted in Washington state – back in 2012, the Wedge Pack was purposefully killed by hunters hired to eliminate them because they had been attacking livestock.

Shortly after the Wedge Pack was killed Conservation Northwest issued a release which stated:

“The Wedge Pack experience has been hard on everybody, which makes it difficult but necessary to look forward. We want to see commitments from the state and cattlemen to expand early use of nonlethal efforts so we don’t have to go through this again.” 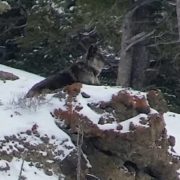