You are here: Home1 / News2 / Dogs3 / dog abuse4 / Social media photos of 2 dogs tied up and dragged to their deaths launch...
Spread the love
Tweet

Several disturbing photos of two dogs tied up with rope, dragged to their deaths and abandoned on a remote dirt road in the Lucerne Valley of California which appeared on social media within the last two days have launched an animal cruelty investigation, reports the

According to the San Bernardino County Sheriff’s Department spokesperson, the Rural Crimes Task Force is investigating the incident as an animal cruelty case. On August 3, Freddie Dodd posted several photos of the two dead dogs on Facebook with the following explanation:

“I found these two dogs last night on the corner of Rabbit Springs and Camp Rock in Lucerne Valley CA. They showed as if they had been drug up and down the street multiple times and eventually killed. I know this is not the kind of thing to post on Facebook, but I was told to do so otherwise. I want everybody and anybody to share this and show how horrible and cruel some humans can be. Share this in hopes that we find out who did this to these two beautiful creatures.”

A week before the bodies of the dogs were discovered, the owner of the two pit bull mixes had reported his dogs missing in the same area. The owner expressed his frustration that the Sheriff’s Department showed little concern over his missing pets and refused to file a report. According to an initial report from NewsVvng, the dogs named Diamond and Sophia, had been accidentally poisoned by a neighbor who had allegedly confessed what he had done.

And when the dogs badly mangled and tortured bodies were discovered, Mariah Figuieredo, the daughter of the owner of the dogs, stated the family was completely devastated just having to imagine what torture Diamond and Sophia had to have suffered. Diamond, the blue and white pup had a rope tied around her ankle and Sophia had a chain around the middle of her body and neck.

Mariah said the dogs were friendly and gentle and can only hope the person(s) responsible for such a heinous deed is caught and punished. Anyone with information regarding this case is encouraged to call the Victor Valley Sheriff Station at 760-552-6800. 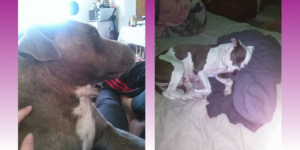