You are here: Home1 / News2 / Odd News3 / The shocking loss of over 300 reindeer in Norway
Spread the love
Tweet

Over 300 reindeer were killed in a mountainous region of Norway on Friday. According to Sunday’s BNO News, the animals apparently were killed by a single lightning strike in Hardangervidda National Park, which is located in southern Norway. The strike, which claimed a total of 323 lives, is believed to be the deadliest lightning strike in history.

A spokesperson for the Norwegian Environment Agency has stated that although animal deaths from lightning strikes are not unusual, the agency has “not heard about such numbers before.” The herd of reindeer were likely staying close to one another during the stormy weather, which helps to explain why so many perished at one time. 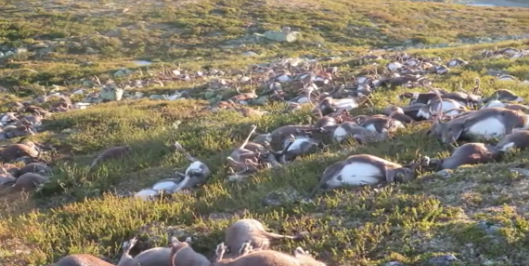 Typically, if one, or even several, animals die, their bodies would be left for nature to “take its course.” However, the sheer number of dead reindeer from this incident has officials with the environmental agency perplexed with how to proceed.