In Shiloh, Illinois, a woman faces animal cruelty charges after she posted a photo of her dog on Facebook with a shoestring tied around the dog’s snout, reports the Belleville News Democrat. 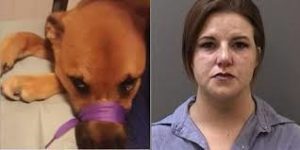 According to the Shiloh Police Department, Sarah Beth Boothby, 24, has been charged with one count of cruel treatment to an animal, a Class A misdemeanor. With the disturbing photo posted, the following comment appeared:

“When you chew up mommy’s shoelaces…” 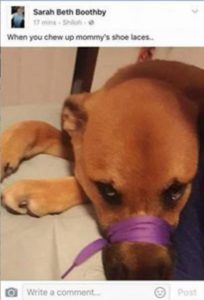 Boothby has since removed the photo from Facebook, but not before the police department received several complaints about the dog’s muzzle tied up with the purple shoelaces “in a manner that appeared that it could restrict the dog’s airflow,” the report stated. The woman told authorities the dog had only been tied up that way for 45 seconds.

Upon further investigation, the dog appeared to be in good health. No information has been supplied whether the dog was removed from the home.