Had it not been for the four-month-old puppy’s photo having been shared through social media thousands of times, Riley no doubt would have never had a future. Brought in as a stray by Animal Control in Gaston, North Carolina, who labeled him the frightened little puppy as “feral,” he was doomed to die at the high kill shelter. How would the pup have a chance to be rescued or adopted? 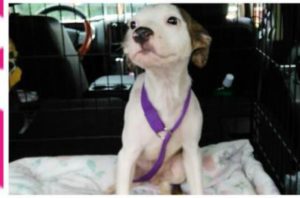 When Rescue Dogs Rock NYC were asked to help save Riley as his photo went viral, the organization’s co-founder, Jackie O’Sullivan couldn’t say no.

“Everyone was so worried about this poor puppy with the label of ‘feral and wild.’ Riley was frightened, alone, filthy and obviously did not come from anywhere good. Look at his nails,” Jackie stated.

One of the rescue organization’s foster homes volunteered to help the puppy, and on Friday afternoon Riley had his freedom walk out of the shelter.

“The once growling, terrified, trying-to-bite puppy very quickly became the puppy you see in the video rolling over for belly rubs,” happily explained Jackie. 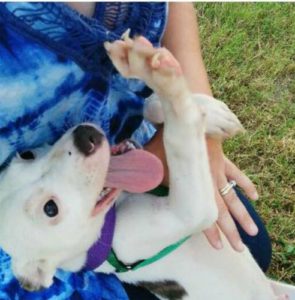 Riley is doing great with the other foster dogs and has been learning to play with toys. After four baths, he is a beautiful white puppy finally rid of fleas, ticks and filth. And to think of all the dogs just like Riley, who in the past have been labeled aggressive and not adoptable… this little puppy is definitely one of the lucky ones.