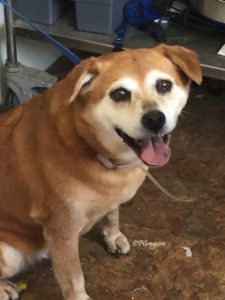 In April, a senior beagle mix named “Riley,” was surrendered to the Baldwin Park Animal Services facility in California with no reason provided by her owner. A month later, she was adopted by a young couple.

What should have been a “happy tail” for the amiable senior has turned into a nightmare sequel – on July 23, her new owners returned her to the same animal control agency that she had been adopted from. On Sunday, a volunteer photographer posted a Facebook update about the newly homeless dog, who was returned with a damning allegation from her most recent adopter:

Riley is a sweet 9 year old spayed female beagle. After being adopted 3 months ago, she was surrendered back on July 23, 2016 and is available now. She was previously adopted by a young couple – the woman adored Riley. the man, not so much. It was the man who brought her back and claimed that Riley “bit” him yet he had no wounds on his hand/arm. She certainly deserves better than that stupid lie. please share for proper home or rescue.

Before the most recent return, Riley had been featured on the United Hope for Animals Facebook page – at the time, the following information was provided about Riley:

Riley is a plug-and-play 9-year-old brown spayed female Beagle and Shepherd mix who was left at the Baldwin Park Animal Care Center by her owner on April 22nd with no reason given. A little overweight at 55 lbs, Riley is sweet and mature with a medium energy and good-natured temperament. She is polite with other dogs and generally well behaved. Her loving and agreeable personality makes her a prime selection for a first-time dog owner.

A senior dog, making it out of a busy, high-intake “kill” facility is somewhat of a miracle…having to win the dog-adoption lottery twice is unlikely. Please help Riley beat the odds by taking a moment to network her adoption information.