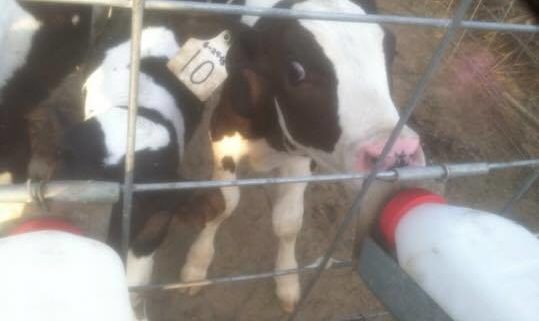 According to a 2016 article posted in Humane Society News,  the veal industry is a direct byproduct of the dairy industry. The male calves born on a dairy farm are taken from their mothers the same day they are born and sold to feedlots.  The life of a veal calf is a miserable existence.  They are forced to stay in individual crates that measure 30 inches wide by 72 inches long. The reason for the small enclosure is to prohibit exercise and normal muscle growth in order to produce tender veal.  Calves that are too small or unworthy for human consumption are sent to dog food slaughter houses. 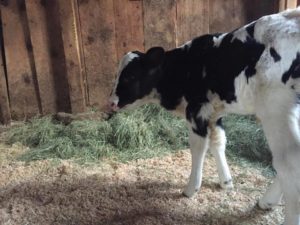 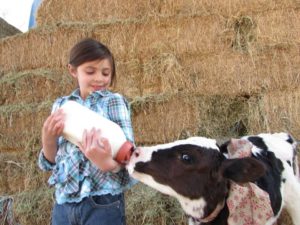 Often when the calves arrive at the slaughter houses they are so weak due to lack of milk from their mothers, they can barely stand up.  Mercy for Animals recorded downed calves shown no mercy as they were beaten, sprayed with a hot water hose or skinned alive.

Not only do the calves suffer physically but also emotionally. One veterinary study revealed that “during natural weaning there is never complete and abrupt abandonment of the calf by the cow. In fact, the … cow and calf will maintain a lifelong relationship of social contact and companionship.” Another study found that a cow and her calf can develop a “strong maternal bond” in as little as five minutes.

Amanda Sorvino is a strong advocate for feedlot calves and has successfully rescued many from local feedlots and slaughterhouses.  She rescued her first calf from a Pennsylvania dairy farm and named him “Frosting.”   He was only two days old and would have been sold to a veal farm.  Today she has a total of 11 bovines at her rescue in southern California.

One cow known as Giraffey Baby was rescued when she was only 4-5 days old. She was rescued along with another cow named Cloudy and saved from a backyard veal butcher. Unfortunately Cloudy was very ill and died just minutes after their arrival at Amanda’s farm. Another calf named Baby G was rescued off a truck en-route to a dog food slaughterhouse in Turlock, California. Mystic Winter, also rescued from a truck bound for the dog food slaughterhouse, is partially blind yet loves to greet all visitors at the gate with kisses and can even shake hands with his tiny Holstein hooves.

But for all the calves she has rescued and saved from a life misery, she is haunted by the one she couldn’t save; one calf known only as Number 10.

Number 10 was born on 06/24/15 on a dairy farm in California.  When Amanda went to the farm to rescue several calves, Number 10 captured her heart. He was friendly and made quite a show of himself to get her attention.  Unfortunately, she already had the three calves she had brought money for and only had enough room for them in her truck.  She will never forget the pitiful crying and screaming from Number 10 as he watched her drive away. It tore her heart out so she contacted the owner of the farm and asked him to hold Number 10 until she could come back for him. She paid the required deposit, but Number 10 was sold at an auction along with a group of other calves.

He was reportedly bought at that auction by the L7 Feedlot in Paso Robles, California. From there he was sold and shipped to a feedlot in Texas; one that regularly gets their supply of Holstein steers from California. Amanda ascertained that Number 10 would have been shipped to Texas when he was between 4 and 7 months old. This would had to have occurred between the end of October 2015 and January of 2016.

Armed with Number 10’s info, Amanda is determined to find him, not just for herself but for a little girl named Belle who fell in love with him. Belle was only 5 when her father, Daniel died. She was devastated, as he was her entire world. After Daniel’s death, Belle’s mother abandoned her.  When she met #10 she instantly bonded with him and was hoping to bring him home to her grandparents’ horse farm, where she currently lives. She saved up money from her lemonade stand to buy him a  Christmas present; a heart locket necklace with a picture of her and her father enclosed. But her baby cow dreams were all at once shattered when Number 10’s dealer stole the cash advance down payment given by Amanda and heartlessly sold him along with 30 other calves at auction. Belle was broken-hearted for the second time around. Today, as winter approaches, she holds close to her dream that she can somehow locate her long lost cow friend by Christmas Eve and have him home at her farm in time to open his Xmas present that she stores in her little toy box. She has never given up hope, and Amanda has not given up on her search for Number 10.

She has been contacting feedlots all over Texas. She has number 10’s date of birth and where in California he was transported from. She is hoping this information will help her reunite with the calf that got away. Time is running out for Number 10.  He is most likely about 15 months old now which means he has about 2 months left before he is slaughtered. Anyone with connections to feedlots in Texas or can locate Number 10 please message Amanda on Facebook via her page https://www.facebook.com/Giraffey-Baby-950455005034586/.