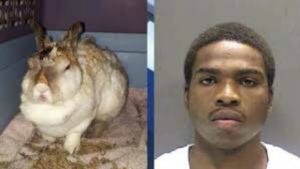 According to the Sarasota County Sheriff’s Office, Manasseh Walker, 22, was charged on Thursday with setting the rabbit named Thumper on fire on June 12;  Walker stated the bunny had bitten him. Witnesses saw Walker chasing the rabbit who seemed to have been on fire.

When another local resident found the injured bunny, he called authorities for help, and an investigation into animal cruelty led authorities to Walker.

Sheriff deputies praised the community for their help in locating Walker who  had been hiding in the Punta Gorda/Charlotte County area. On the organization’s Facebook page, Walker’s arrest was announced:

“UPDATE: In less than 24 hours after posting Manasseh Walker’s mug shot, our men in green have put him BEHIND BARS! You read that right – the 22-year-old responsible for the intentional burning of a domestic rabbit named “Thumper” is now in custody. Special shout out to the SCSO Fugitive Apprehension Unit, Charlotte County Sheriff’s Office and Punta Gorda Police Department for their joint efforts in tracking him down! Walker was located early this afternoon in the 300 block of East Grace Street in Punta Gorda and was taken to the Charlotte County Jail. THANK YOU to all who helped share Walker’s photo and bring ‪#‎JusticeForThumper‬!”

Thumper was rushed to an animal hospital where he was administered first aid after suffering severe wounds.  Although scared and injured from burns, Thumper is expected to survive. In an update on Thumper’s condition, Dr. Renee Simoneaux, owner of the New Hope Pet Hospital where Thumper is a patient, stated:

“Thumper likely has a long way to go, but recovery is tricky. Any kind of animal cruelty is a pretty horrific thing. Burn wounds can be very trick. Tend to get infected easily. There’s a lot of pain you have to deal with.”