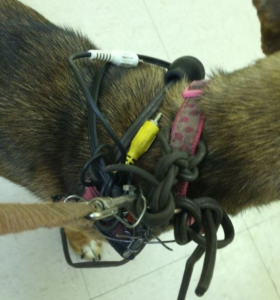 On Tuesday, People for the Ethical Treatment of Animals (PETA) announced the offering of a $5,000 reward for information leading to the arrest and conviction of whoever left a young dog, tied up with wires, on a bridge in North Carolina. The one-year-old beagle mix, dubbed “Angel,” was discovered on July 2 by a driver who saw her tethered near the intersection of Slippery Log and Thompson Town roads in Columbus.

Authorities responding to the disturbing situation found the dog tethered with wires, an extension cord, duct tape and RCA connectors – whoever left the pup there did so when the temperature was nearly 100-degrees.

“It takes a dangerous lack of empathy for someone to tie a puppy to a bridge and abandon her to die slowly from starvation or heatstroke,” says PETA Vice President Colleen O’Brien. “PETA urges anyone with information about this case to come forward immediately, before anyone else gets hurt.”

The pup, who was covered in insect bites, and suffering from dehydration and malnutrition, was taken to an area shelter for ongoing care and treatment.

Anyone with information about this case is encouraged to call Columbus County Animal Control at 910-641-3945.