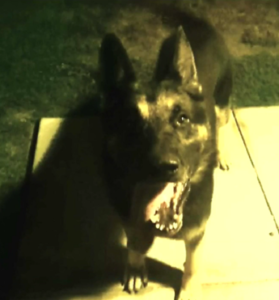 A retired police canine received fatal stab wounds after he inexplicably attacked a 20-year-old man who had given him water, reported Tuesday’s publication of the Los Angeles Times. The German shepherd, named “Thor,” was wandering in an Eastvale, California, neighborhood on Sunday night when the good Samaritan offered him water.

Shortly thereafter something will terribly awry. According to reports, the dog placed his paws on the man’s chest and then began to viciously attack him. Family members of the man tried to help by kicking and hitting the dog, but it was not enough to halt the attack.

In desperation, the victim’s family members resorted to using steak knives to stab Thor – the injured dog, who was removed from the scene by animal control, had to be euthanized because of the severity of his injuries.

A microchip later revealed his name and that he was once a working canine with the Los Angeles County police force.  The injured man was taken to an area hospital for treatment.