His name was Sherlock Bones, and Ninna’s Road to Rescue in Benton, Louisiana rescued the tiny dog from Caddo Parish Animal Services after he was surrendered as a “stray.” 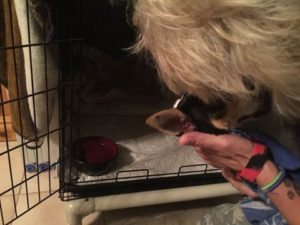 On Friday morning, Sherlock Bones died as a result of heartworms – in dogs the disease is easy to prevent, but difficult and expensive to cure. And on the rescue’s Facebook page, Ninna Lopez, the founder of the rescue, addressed Sherlock Bones’ former owner:

“…and we hope you see this… because YOU FAILED HIM. I bet when he was a puppy, he was the cutest and you loved him so much… right? BUT YOU FAILED HIM!”

And as the tears fell with the dog’s lifeless body cradled in her arms,  more words poured out, addressing the senseless death that could so easily have been avoided:

“I bet that those days of him entertaining you… giving you kisses… meeting you at the door when you got home… were great, huh? BUT YOU FAILED HIM! YOU killed him by not protecting him from heartworms. Less than $10 a month you could have protected him from what we ultimately had to witness… his death by heartworms after going through heartworm treatment. You could have skipped that lunch at McDonalds… or that cup of coffee from Starbucks… or that pack of cigarettes… or soda… or freak’n just about anything… and protected him. BUT YOU FAILED HIM!”

And with the tender farewell to a sweet dog who deserved better came the warning to the nameless, heartless and ignorant owner who dumped poor little Sherlock Bones just because …

“I hope you see this! I hope it haunts you… like it’s going to haunt us. I hope you learn from this. I hope that if you have other dogs now that you put them on heartworm prevention. Sherlock Bones knew we loved him. He knew he was special and adored and cherished. We just couldn’t save him…. BECAUSE YOU FAILED HIM! As I cradled him in my hands after he passed… my tears fell on his sweet little face and I told him… ‘We all love you Sherlock Bones… you will always be remembered… and I’m so sorry your former owner failed you.’ So, former owner… give all dogs a chance at life and don’t get another dog. ~ Ninna”

Perhaps the saddest part of the death of this dog and so many other dogs brought into shelters is how inexpensive the disease is to prevent. Often the analogy that the cost of buying a weekly Starbucks coffee can easily prevent what happened to Sherlock Bones. Prevention comes in monthly pills, topicals or an injectable; save a life and be a responsible pet parent. Read more about the prevention and cure for heartworms here.