You are here: Home1 / News2 / animal cruelty3 / Rescued: Mutilated one-month-old kitten with her ears burned off
Spread the love
Tweet

In a disturbing photo that could literally make someone sick to their stomach, Baltimore Animal Rescue and Care Shelter (BARCS) rescued a one-month-old tortured kitten on Thursday morning. 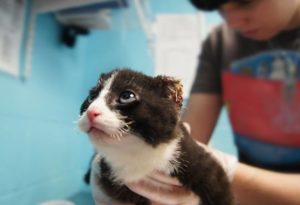 When a  concerned citizen called the Baltimore City Animal Control 311 helpline, after finding a nearly lifeless kitten on the windowsill of a first floor apartment, Animal Control officers arrived to find the helpless little kitten severely burned and in pain. Dubbed Duckie, the tiny black and white little one was rushed to emergency care with the BARCS medical team. On the organization’s Facebook page, Duckie’s  torturous injuries were described.

“It was immediately clear that Duckie’s injuries were the result of fire. Her little “bean” pads on her feet are painful and deep red; her ears are freshly burned from the tips down; her whiskers are short, spiky and singed. There is minimal burning on other parts of her body, which lead our staff veterinarians to believe that this was purposeful, targeted and done by a person with intent to harm.”

Still throughout her very short life of having been abused, Duckie still purrs and wants only to cuddle  and curl up into her rescuers’ arms. Who could even think of inflicting such pain onto a completely innocent and defenseless baby?

Community help is needed. As is stated – this isn’t just a story about a kitten, however her story is very important since people who abuse animals frequently continue and work up to harming people. Duckie’s abuser is still out there. Not only does this kitten deserve justice, but getting these criminals and abusers recognized, punished and taken off the streets is as important. Anyone with information is asked to call 410-396-2400, 911 or 311. You can remain anonymous. Baltimore City Animal Control and the Baltimore City Police Department have an open investigation on this case.

Donations are being accepted for Duckie by clicking here.