You are here: Home1 / News2 / Dogs3 / dog news4 / Puppy thrown away in trash can outside of shelter
Spread the love
Tweet 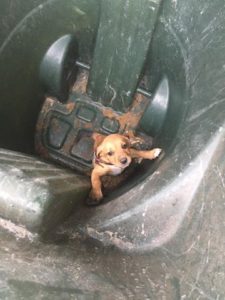 This week, an adorable mixed-breed puppy was thrown away in a trash can outside of a Tennessee animal control agency. On July 12, the Springfield Animal Control posted multiple photos of the puppy, along with a request and explanation as to how she was found.

Good afternoon!! This baby need a good loving caring home, I came to work this morning and she was inside the trash can ?????Please help me find a good home for her. I give her a warm bath, she was hungry and thirsty.

The post struck a chord with Facebook followers who expressed sadness and outrage over the way that the puppy was abandoned. Fortunately, there ultimately is a happy “tail” for this adorable pup – on Thursday, the animal control agency announced that the puppy had already been adopted. 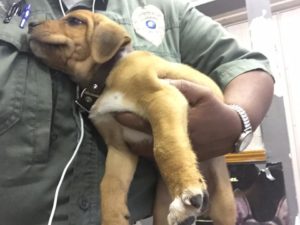 According to the Tennessean, social media has been an excellent resource for the shelter – in fact, postings to Facebook are so successful that only sick or extremely aggressive dogs are put down now.

A follow-up call to the person who adopted this pup revealed that things seem to be going well – the adopter repeatedly mentioned that the puppy is very loving.