At 10-months-old, it was difficult for anyone to imagine what kind of torture Turk had endured in such a short life. When found wandering through the parking lot at Turkey Mountain Urban Wilderness in Tulsa, Oklahoma at the end of July, his prognosis didn’t seem promising, reported KjrhNews. 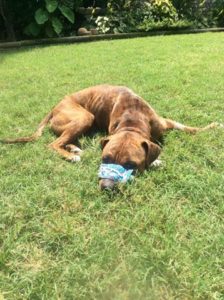 Amy Vaughan found the pup, she dubbed Turk; he had been whimpering in pain and crying for someone to help him. Experts assume the young pooch had been used as a “bait dog” in the training for  the egregious “sport” of dog fighting.

“He was walking and when I called him, he kind of tucked his tail and ducked his head. You could tell he was really scared. It broke my heart when the vet called and said he had his mouth taped shut. I broke into tears; it’s just unbelievable that people could do something like that.” stated Vaughan. “I’m assuming some one did that and then dumped him up here.”

It isn’t known how long Turk’s muzzle had been taped. According to his veterinarian at Bent Arrow Veterinary, Turk suffered an incredible amount of pain, however not once did he ever growl or show any aggression as his rescuers treated his injuries. With a great deal of damage to the inside of his cheeks, the dog also suffered from a huge ulcer on his tongue. Turk underwent two surgeries to repair the damage; a part of his tongue had to be removed. 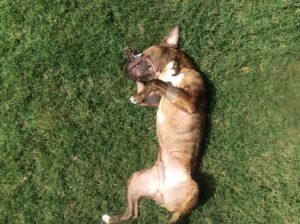 Turk has been living with Amy and her family for weeks, but now it’s time this very sweet dog found a home of his own. He’s kid friendly, lovable, gets along with dogs and cats and just wants to be loved. If interested in giving this boy the second chance he so deserves, contact the  Animal Rescue Foundation at 918-622-5962 or click here for an adoption application.

4-week-old puppy purchased off of Craigslist and then dumped because he was... Kitten’s paw stuck in sewer cover: Dramatic rescue
Scroll to top