A rescue group in Peachtree City, Georgia describes the condition of a young pup as the worst they have ever seen. Abandoned and left tied to a tree, the dog was found on Monday and taken to the county shelter who immediately called out for a rescue organization to help. 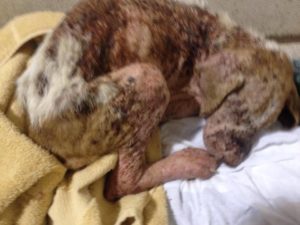 Hounds in Pounds have committed to helping the dog, now dubbed Phoenix, named after a bird that built its own pyre and  was subsequently reborn from the ashes.

“… He was found tied off to a tree and is critical right now. He is septic, his skin is raw from infection and fly larvae have nested in his skin; he needs emergency care to save his life. We have never seen any dog in a worse state than this. We will need everything you can offer us…. plus more besides,” announced the rescue organization on their Facebook page. 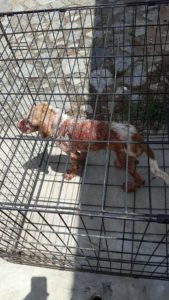 According to the dog’s update on Tuesday, Phoenix is still extremely critical, and is  being treated for pain and given antibiotics for his  raging infections. There has been speculation the dog’s injuries may have been the result of burns. 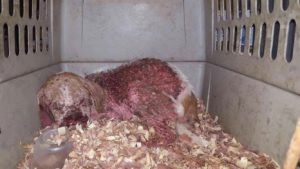 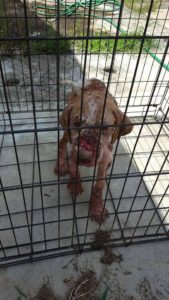 His condition is being constantly monitored. A YouCaring page to help with the dog’s  veterinarian expenses can be found here.

(Photos by Hounds In Pounds)