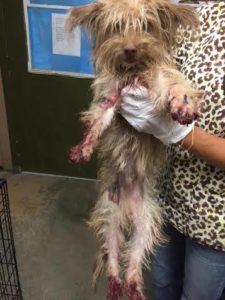 In Hinesville, Georgia, a seven-month-old puppy is in critical condition after he was tied up in the back of a truck bed and jumped out. According to the rescue group, Carpathia Paws, the tiny puppy now dubbed Basil had been found by people with good intentions, however the situation nearly ended in the death of the dog.

“…was found by somebody in our county …they then went ahead and put him in their truck bed and tied him up ….you can take an educated guess what happened next …

YES….obviously he was able to jump out and drug (sic) behind the truck…no knowledge of the name of the people that obviously started off having good intentions by picking him up …..but ….the dumb ass award of the year hasn’t been awarded yet, so they will def be in the top 5 ..if not THE winner ….” 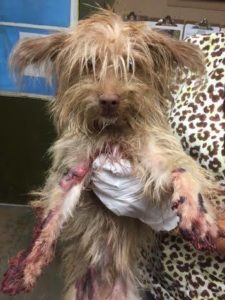 Basil is being treated at Cedar Animal Hospital in Richmond Hill. The pup has been sedated, is currently on IV fluids and administered pain medication. Hopefully he will regain use of his paws. 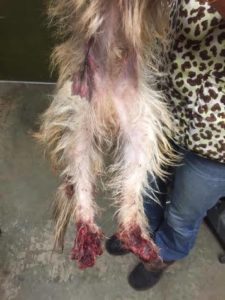 Emergency funds are needed to help this tiny victim. A YouCaring page has been set up to help.

Basil’s  injuries are just  one example of dogs riding in  pickup trucks.  If possible, dogs should ride inside of the truck with you, and then be restrained with a carrier, a crate or a dog car seat. If your dog must ride in the back of a pickup truck, it is strongly suggested to use a truck cover to ensure your dog is safely secured as well as being protected from flying road debris. If there are no other options for transporting your dog, use a dog crate which is secured to the truck bed.