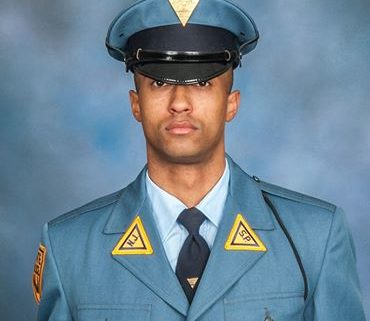 This summer, Trooper Frankie Williams, with the New Jersey State Police, rescued a dog who was dying of heat stroke inside of a car…on December 5, his life was ended when an erratic driver who smashed into his patrol vehicle.

Today the New Jersey State Police family must endure yet another tragic loss of a bright and promising trooper who lost his life while serving the citizens of New Jersey.
Trooper Williams was highly respected by his peers, establishing himself very early in his career as an outstanding trooper able to think quickly on his feet and make sound decisions. Just this past August, with just six months on the job, Trooper Williams rescued a dog that was locked inside of a car with only a cracked window on a hot summer day.
Without hesitation, he broke the car window with his expandable baton and removed the dog from the car. He then brought the dog, which was suffering from heat stroke, to a shaded area, pouring water over the its body to cool it down before giving it water to drink.

According to the State Police, the driver of the other vehicle has been identified as 61-year-old Lloyd Rudley of Elmer, New Jersey; Rudley died in the crash as well. The man was driving a Toyota Corolla that crossed the grass median on State Highway 55 and struck Trooper Frankie Williams head-on.

Trooper Williams was in the area after receiving reports of an erratic driver. Rudley’s vehicle matched the description of the erratically driven vehicle in the area. The accident remains under investigation.

According to the New Jersey State Police, Trooper Frankie Williams was 31 years old; he was a member of the 156th State Police Class, which graduated January 29, 2016.

Paralyzed dog sat in the pound for months