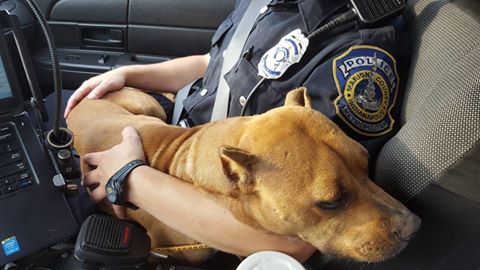 A malnourished dog received a helping hand from police officers in Indianapolis, Indiana, this week. On Tuesday, the Indianapolis Metropolitan Police Department (IMPD) recounted how the rescue effort took place.

IMPD explained, “Recruit Officer Freeman and her Field Training Officer Solomon were assisting another Recruit Officer with a traffic stop near W. 29th St. and Barnes Ave. on IMPD’s Northwest District when Freeman noticed a dog in the front yard of a residence.” The dog, who was not wearing a collar, appeared to be starved, but she was friendly.

The officers noticed that the gate to the yard was open and they stopped to speak to the residents, who denied that the dog was theirs. Animal control was contacted, but they were not able to respond in a timely manner, so the officers decided to take matters into their own hands.

Officer Freeman secured the dog and arranged to have Animal Control meet at a veterinary office. The dog, who is described as “very calm, sweet and friendly,” was loaded into the patrol vehicle and transported to the veterinarian.

According to IMPD, the dog will soon (if not already) be available for adoption – she may even find herself living with a police officer because several officers have expressed an interest in offering her a new home.

Abandoned dog left tied at terminal by her pink leash with a garbage bag as...
Scroll to top