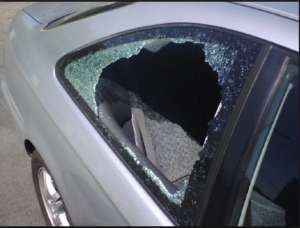 On Friday, a police officer who injured himself on broken glass while rescuing a dog from a parked vehicle in Sparta, Wisconsin, was laughed at by the people who opted to leave their dog inside of the virtual oven on wheels. According to Monday’s CBS 58 News, the owners, who had been shopping inside of a Wal-mart store, told the injured office, “that’s what you get,” in reference to his wounded hand.

The car’s owners, identified as Santana Martinez and Melissa Rincon, were not happy that the police officer had broken a car window to free the dog from the vehicle’s hot interior; outside temperature on the day of the incident was in the 90s, reported the LaCrosse Tribune.

The officer had waited to break out one of the vehicle’s windows – before opting to break a window, the officer had asked store personnel to ask for the owner of the car to return to the vehicle over the store’s public announcement system, but the request was ignored.

Martinez and Rincon were cited for animal cruelty for their decision, but they were not taken to jail.