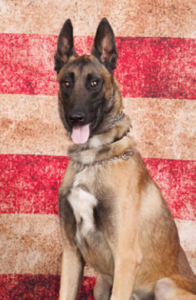 A working canine, with the Porterville, California, Police Department, died from heat exhaustion after the air-conditioning in a patrol car shut off, reported Thursday’s Los Angeles Times. The K9, a Belgian Malinois named “Idol,” had been placed in the patrol vehicle after a training exercise on Wednesday.

When the canine’s handler returned to the vehicle an hour-and-a-half later, the car was off, and Idol had already died. Idol’s partner is devastated over the loss of the dog; Porterville Police Chief Eric Kroutil commented on the tragic loss, “In his terms, his terms, it’s like losing a kid. They’ve been together for two years. This officer is one of our top officers, he’s SWAT, he was our officer of the year last year for the department. He’s a stellar officer, he pays attention to all the details. It’s just a tragedy,” reported ABC 30 News.

Idol’s death happened after multiple failures – the air conditioning turned off and a warning system, which is supposed to alert the handler if the system fails, did not work either. Investigators found a disconnected cable to the warning system.

The Porterville Police Department has stated that new, “state-of-the-art” warning systems are being installed in all of the K9 patrol vehicles.