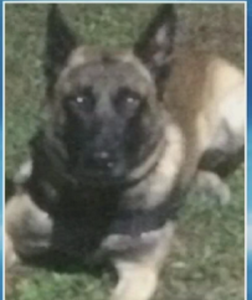 According to Friday’s ABC 7 News, a working canine with the Montgomery County Sheriff’s Office in Hillsboro, Illinois, died from heat exhaustion inside of a patrol car. The three-year-old dog, named “Blitz,” died after the patrol vehicle malfunctioned and a back-up safety sensor apparently failed to activate.

Undersheriff Rick Robbins commented on the failures that are believed to be responsible for Blitz’s untimely demise, “We think there were two malfunctions – One was with the vehicle and the other with the alarm that we bought.”

Blitz was inside of the patrol vehicle, which was parked outside of the department, for several hours – his handler had left the car running, with the air-conditioning on. The SUV was supposed to roll down the windows and activate the sirens and lights if the air-conditioning failed…for some reason, the back-up safety features did not work on the day that Blitz died.

K9 Ace, the manufacturer of the heat alarm system, has been working with the department to see why the failure took place. Product owner,  John Johnston, is calling the incident “very rare,” and he wants to assure the public that the handler was not to blame for the freak, fatal accident which claimed the canine’s life. Johnston stated, “And most of all, I just want to say that the handler was not at fault. It breaks my heart to see people trying to blame him, but I can tell you he did nothing wrong.”