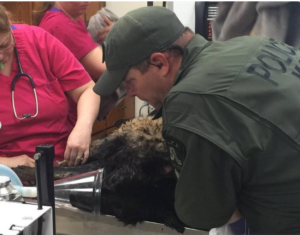 According to the department, K9 Mojo, a Belgian Malinois, was assisting detectives who were tracking a fugitive who was wanted in conjunction with the shooting of another man. The incident in question took place on June 12 and detectives had secured an arrest warrant for the suspect, identified as 17-year-old Shune Deon Arnold Jr.

Detectives attempted to pull the suspect over on Tuesday morning, but he fled – eventually the suspect exited his vehicle and fled on foot. Mojo was part of a canine team which was sent to assist in the search. Around 11:15 a.m., Mojo’s handler could see that the dog was overheating and he requested water and transport to an animal hospital.

Despite the veterinary intervention, Mojo passed away. The suspect that he had been trying to track was apprehended in the late afternoon following a call to 9-1-1 from someone who spotted the man in the area.

Mojo was born in Holland and he had been working with the department since 2010 – he had been partnered for six years with canine handler Ramsour, a 23-year-veteran of the force.

Mojo has been credited with many felony apprehensions and searches for dangerous criminals.

“Today we experienced a significant loss to our APD team. Mojo was an exceptional K9 partner, friend, and served the citizens of Arlington honorably,” said Assistant Police Chief Kevin Kolbye. The department appreciates the words of encouragement and prayers. This is the first K9 death during a duty assignment in Arlington.